The new book by Francine Mestrum and Meena Menon 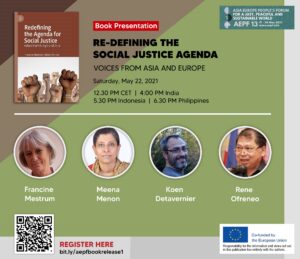 It is crystal clear during the COVID-19 crisis: people need protection, health care, clean water, decent housing and … income. These services are not available for huge numbers of people all over the world. What happened with the COVID-19 crisis was that all of a sudden their numbers were growing. Too many public services have been privatised in past decades and made unavailable or unaffordable for too many people, no doctors or hospitals, no clean water and soap, no decent housing. In these circumstances, how to protect yourself? How to protect others? Moreover, due to the lockdowns, people lost their jobs, informal and platform workers were unable to earn anything, street vendors went idle … how then to survive? Where, without the crisis, some poor people were always able to earn something with minor jobs and activities, their needs were largely invisible to those who prefer to not know and not see. Or they were blamed for being poor, for not taking all the ‘opportunities’ offered to them.

This is the silver lining of this crisis: no one can pretend anymore to not know and not see. The needs are enormous. People are suffering and all too often, dying, if not from COVID, from hunger.

END_OF_DOCUMENT_TOKEN_TO_BE_REPLACED

Posted in No category | Comments Off on Income Security: Options and Choices

Changes for a post-COVID world?

Posted on 2 June 2020 by Francine Mestrum

There is something profoundly disturbing about this crisis. The results are frightening: ten thousands of deaths, hundred thousands of sick people, major cities in lockdown, an economic collapse…

Slowly, from China and South-East Asia, the crisis is now hitting Europe, the United States and will inevitably spread from there to the South. And as we know, the majority of poor countries does not have the capacities to care for their people. Almost half of the world population does not even have water and soap to wash their hands.

Speculations are going on on how our world will have to change after the crisis. But will it change?

One might smile when seeing how many healthy people come with their solutions, closely following their own yearlong concerns. Eurosceptics condemn the European Union for the lack of solidarity and promote more national approaches; advocates of basic income think to solve all problems with a monetary allowance; futurologists see a total collapse coming; ecologists point to the destruction of biodiversity and promote vegetarianism. And of course, those who believe in conspiracies see the virus travelling from the U.S. to China or vice versa.

Naomi Klein is careful and states this crisis might lead to catastrophic changes by leaders who just take this opportunity to do what they might not be able to do in normal circumstances. But her followers are not and already see capitalist takeovers and more austerity measures coming. END_OF_DOCUMENT_TOKEN_TO_BE_REPLACED

Posted in No category | Comments Off on Changes for a post-COVID world?

Posted on 13 January 2019 by Francine Mestrum

How the World Bank turns meanings to its advantage.

With all the paradigmatic changes the World Bank has been promoting in the field of social policies, one element never changed in the past thirty years. Social policies were meant for the poor, governments had to find the best ways to target those who really needed their help.

The reasoning is simple: poor people, as was spelled out in its first World Development Report on Poverty of 1990[1], were those left behind by growth and by governments. The wrong policies were applied so that poor people did not get access to labour markets and, moreover, these labour markets were made more difficult to enter because of minimum wages and other ‘protective’ rules the poor did not really care about. If one really wanted to help the poor, one had to abolish all these well-meant but adverse policies. Open, deregulated markets, at the local and the global level, were the best programmes for the poor. In its ‘Doing Business’ Report of 2013[2], the World Bank still considered fixed term contracts and 50-hour workweeks as positive achievements, whereas premiums for night-work and paid annual leave were on the negative side[3].

As for the not-so-poor or middle classes, these people are said to have enough resources to buy the insurances they want on the market. Insurances are an economic sector and there is no reason why States or governments should get involved in it[4]. Solidarity is one of the words that has always been shunned by the international financial organisations. END_OF_DOCUMENT_TOKEN_TO_BE_REPLACED

Posted in No category | Comments Off on Universalism … really?

Posted on 6 January 2019 by Francine Mestrum

We are happy to present to you a video we made on social protection and our Global Charter for Social Protection Rights. It was made with the help of the NGO Forum on ADB. So many thanks for this!

Please watch the video and distribute it as widely as you can:

In the meantime we are preparing the Asie Europe People’s Forum’s Social Justice Cluster’s conference in Nepal on social protection and labour rights. In Une there will be a new World Social Forum on Health and Social Security in Bogota.

Posted in No category | Comments Off on Video on Social Protection

Posted on 6 October 2018 by Francine Mestrum

The final Declaration of the nAsia Europe People’s Forum, adopted in Ulaan Baatar in 2016, included an action point for the social justice cluster, saying:

Arguments in favour of the Global Charter for Social Protection Rights

Posted on 24 September 2018 by Francine Mestrum

–        According to the Universal Declaration of Human Rights, social protection is a human right.

–        Social protection is a major element of social justice – if you have no pensions, no health care, no labour rights etc., it is difficult to lead a decent life in dignity

END_OF_DOCUMENT_TOKEN_TO_BE_REPLACED

Social protection, the World Bank, the IMF and Lewis Carroll

Posted on 4 April 2018 by Francine Mestrum

Excellent fable on how poor countries, with excellent social protection schemes, are losing … ‘through the looking glass’ …

On the human right to social protection

Posted on 10 December 2017 by Francine Mestrum

Good to watch, an explanation on the human right to social protection and economic and social rights